On the twenty-eighth day of April in the year 1895, Anna Adolphina Larson, who had sailed to America from Sweden earlier with her sisters, married Gustaf Lawrence Bowman, whose parents had made the same journey some thirty years earlier.  As the wife of a farmer and owner of a general store, she went on to raise nine children, of whom the fifth was my mother, Viola Albertina Emelia Bowman.  By the time my grandmother died in 1953, she had accumulated a thick book of recipes, some of which she brought with her from her native country.  My mother inherited that cookbook.  I’m sorry to say that it has been lost.  But certain recipes have survived.  This is one of them. 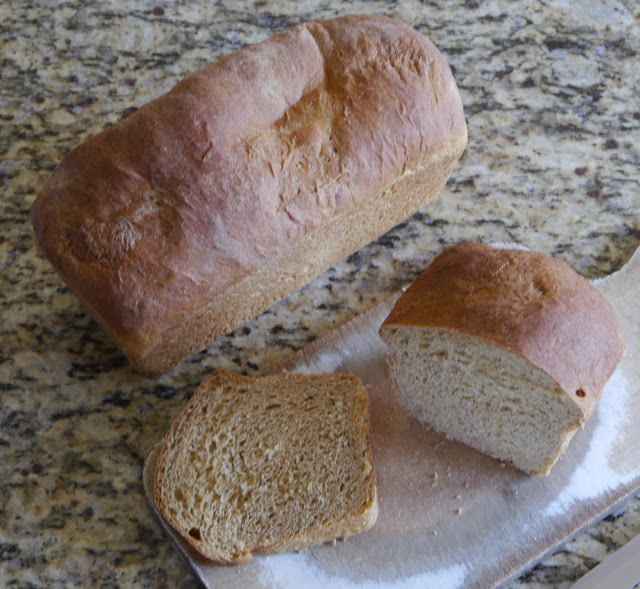 It seems odd that certain smells can so readily and precisely evoke past memories.  For me, the odor of crushed cardamom and grated orange rind, mingling with the molasses-yeasty smell of the dough rising on the register or in an open oven, is a powerful reminder of those afternoons when we impatiently waited for the moment of the slicing of the bread.


Over the years, with some advice from Lois Owicki, my “second mother”, I have adapted the recipe so that it is lighter and less dense; but it still has that good old taste.

In another bowl, sift together 2½ cups medium rye flour, 1 cup white flour (I prefer unbleached), and 1 tablespoon salt.  Depending on the rye flour you use, you may want to use less.  I currently use about 1¾ cups, adding white to make 3½ cups total.

Add to the liquid 4 tablespoons shortening (I like melted butter), the grated rind of one orange, and 1 or 2 pods cardamom (maybe ½ teaspoon, to taste), crushed fine.

Blend the dry ingredients into the liquid, stirring until smooth.  Cover the gooey mess (a pizza sheet or plastic film works fine) and let it rise double in a warm spot.

Stir the batter down, and add 2½ cups more white flour.  Sprinkle another half cup on your work surface.  In the bowl, work the flour into the dough with a spoon, then your hands; and then dump it onto the counter and knead ten minutes or so, trying to maintain a sticky inside.  Grease the dough, and put it back into the bowl (I don’t bother to clean out the bowl).  Cover, and let the dough rise double.  I use a warm oven, somewhere around 110-130°.  If you want a finer-textured bread, you can punch it down, give it a mini-workout, and let it rise again.  Usually, by this stage, I’m too impatient to wait much longer, so I skip this third rising.

Cut the dough in two and form into loaves.  I usually do that using a bit of torture:  I take a big old rolling pin and roll the dough into rectangles maybe 10”x15”.  The size isn’t critical.  Then I roll them up and squeeze them so they’ll fit into the greased bread pans.  Pop the pans back into the warm oven, cover with a piece of greased wax paper, and let them rise double or until they look right.

Carefully remove the pans, peel off the wax paper, and heat the oven to 350°.  When it’s hot, pop the loaves back in.  Lately, we’ve been pulling the loaves out at the 30-minute mark; but it shouldn’t take any longer than about 40 minutes.  Remove from the oven, remove loaves from pans, and cool on wire racks.

I prefer the bread, either plain or toasted, with only butter on it.  But raspberry jam is good too.  Usually, half of a loaf will disappear before the bread has had a chance to cool down.

Feel free to leave a comment. Note that I screen all comments before they will appear here.